“We still have a ninja’s greatest weapon: hope.” Netflix has unveiled the full official trailer for The Rise of the Teenage Mutant Ninja Turtles: The Movie, a spin-off sequel to their “Teenage Mutant Ninja Turtles” anime series. This special Turtles event is a movie landing on Netflix in August as part of their summer festivities. The Teenage Mutant Ninja Turtles are back in action and up to their teenage antics in this comedic adventure that raises the stakes higher than ever. When a mysterious alien arrives from the future with dire warning, Leo is forced to rise up and lead his brothers, Raph, Donnie and Mikey in a fight to save the world from a terrifying alien species. With the voices oBen Schwartz like Leo, Omar Benson Miller like Raph, Brandon Mychal Smith like Mikey, Josh Brener like Donnie, and Eric Bauza like Splinter; more Kat Graham, Haley Joel Osment, Rhys Darbyand Jean-Michel Higgins. The big bad they have to fight is Krang, in what looks like a Akiratakeover of their beloved city. I really like the animation style and character design of this series – looks like it will be worth watching. 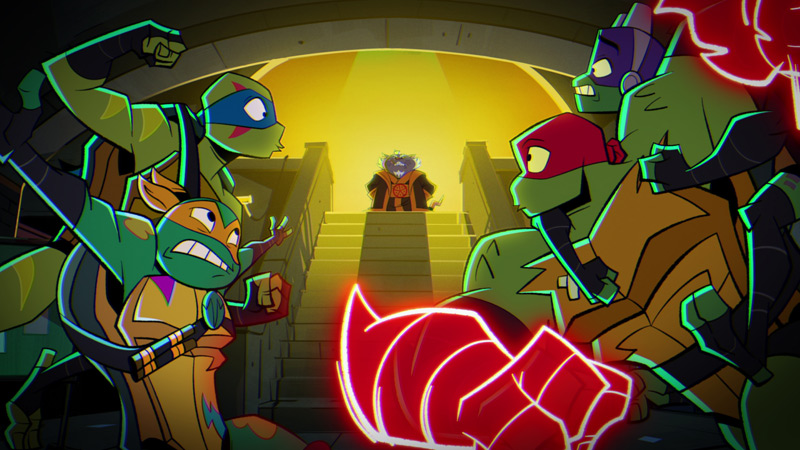 Continuing the story of the hit Nickelodeon series, Raphael, Michelangelo, Leonardo and Donatello are back in action and down to their teenage antics in this comedy adventure that raises the stakes higher than ever. The Turtles are put to the test when a mysterious alien named Casey Jones arrives from the future to warn the mutant brothers of an impending invasion by the galaxy’s most dangerous alien force – the Krang! Can the team become the heroes they were destined to be, or will their teenage weaknesses prevail? What unfolds is the most adventurous, moving and epic story of the Teenage Mutant Ninja Turtles ever told. The Rise of the Teenage Mutant Ninja Turtles: The Movie is co-directed by filmmakers Ant War (supervising producer on the series “The Penguins of Madagascar” & “TMNT”) & Andy Suriano (director on “Plastic Man” + a character designer of the series). The screenplay is written by Tony Gama-Lobo and Rebecca May. Made by Nickelodeon Animation. Netflix will debut The Rise of the Teenage Mutant Ninja Turtles: The Movie streaming on Netflix from August 5, 2022 later this summer. Who’s down there?